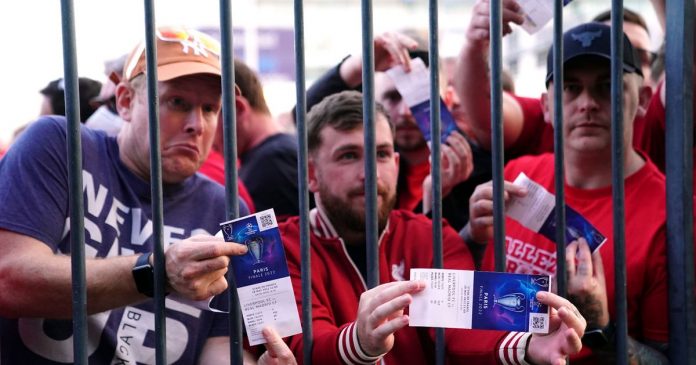 Uefa has apologised to Liverpool and Real Madrid fans caught up in events around the Champions League final and said it must not happen again.

Real Madrid have asked for answers on the “series of unfortunate events”.

“No football fan should be put in that situation, and it must not happen again,” said a Uefa statement.external-link

“Uefa wishes to sincerely apologise to all spectators who had to experience or witness frightening and distressing events in the build-up to the Uefa Champions League final at the Stade de France on 28 May 2022 in Paris, on a night which should have been a celebration of European club football.”

European football’s governing body had previously announced that an independent review of what happened in the build-up to the final, and what lessons should be learned, would be led by Dr Tiago Brandao Rodrigues from Portugal.

French authorities and Uefa had blamed late arrivals and fake tickets for chaotic scenes outside the Stade de France, which caused the match to be delayed by more than half an hour.

Earlier on Friday, Real Madrid issued a statement asking for answers about “unfortunate events” at the game, which the Spanish team won 1-0.