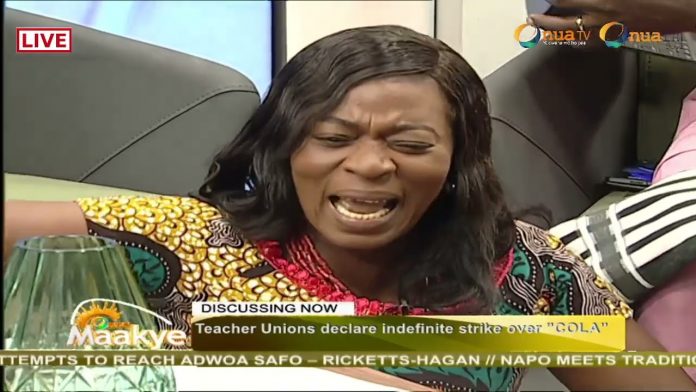 An aggrieved teacher has cursed any of the teacher union leaders who intend compromising the welfare of Ghanaian teachers for his personal gains.

Naomi Abena Dornu, who was part of a panel discussing the teachers strike and the 20% COLA said even though they are not in support of the COLA, none of their union leaders should allow himself to be greased to convince them back to the classroom.

The COLA, according to some teachers, is a regressive call which should not warrant the energy their union leaders are exerting, but rather, they should focus on bargaining for salary increment.

They say the COLA would not have any bearing on their pension and can also be scrapped anytime.

Mrs. Dornu explained that in as much as they reject the call for the COLA and seek salary adjustment, some of their union leaders have always collected envelopes at the welfare of the members whenever they rise for a common course.

Some students yet to report to school after suspension of strike

W/R: We’ll deal with gov’t officials boot for boot if they don’t mind their utterances on our COLA request – NAGRAT