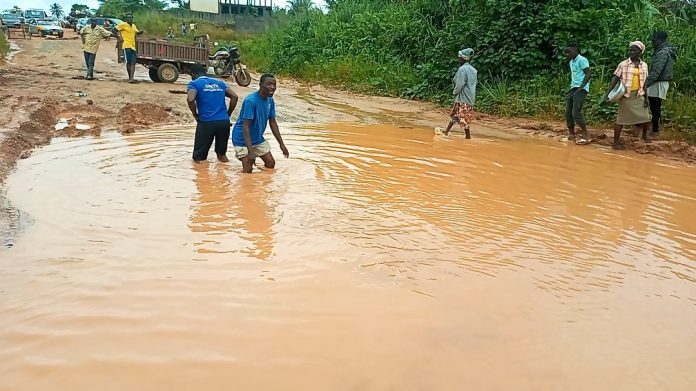 The Western Regional House of Chiefs has registered its displeasure over the deplorable state of roads in the region.

The House is appalled that roads leading to, especially productive communities in the region have been left inaccessible considering how critical the region is to the development needs of the country.

The House of Chiefs expressed the displeasure at a meeting between its members, the regional coordinating council, heads of departments and MMDCEs.

It was to discuss the state of affairs in the region and assess government’s responses to the current development challenges.

Speaking on behalf of the House, the Omanhen of Gwira, Awulai Angamatu Gyan, mentioned that though the region contributes significantly to the development needs of the country, the state of affairs leave much to be desired.

According to him, Nananom is particularly worried about the state of roads. He mentioned that majority of the roads in the region are riddled with life threatening potholes which make travelling on them scary.

Of great concern is the fact that, roads leading to productive communities are so deplorable that tons of farm produce are left to rot.

“Regional Minister, the kind of insult we receive whenever we visit our community, you have no idea at all because of the deplorable state of our roads, especially the road from Takoradi to Tarkwa. The kind of insults we receive from this road is too much for us as Nananom. Minister, I can say that the major road leading from Agona to Discove and Busua is not in good state. Bawdie to Asankragua is not good. From Asankragua to Samreboi is not good. Shama Junction to Shama, nothing good,” he complained.

Responding, the Western Regional Minister, Kwabena Okyere Darko Mensah, mentioned that close to 2000kms of road have been awarded on contract in the region.

Unfortunately, he mentioned that majority of the contractors have abandoned site with the excuse of non-payment.

“Infact Nana, the roads we have awarded to contractors alone is One thousand nine hundred and fifty nine kilometers (1,959) in the Western Region. But some contractors are not on the site. Nana, if all contractors are working on the roads this issues will not come up today.

“The contractors are complaining about the funding. But Nana, before any contract will be awarded to the contractor, that person have to show his bank accounts indicating his capability for the job. So I find it difficult to understand them whenever they blame government for not paying the certificate they raised,” he responded.