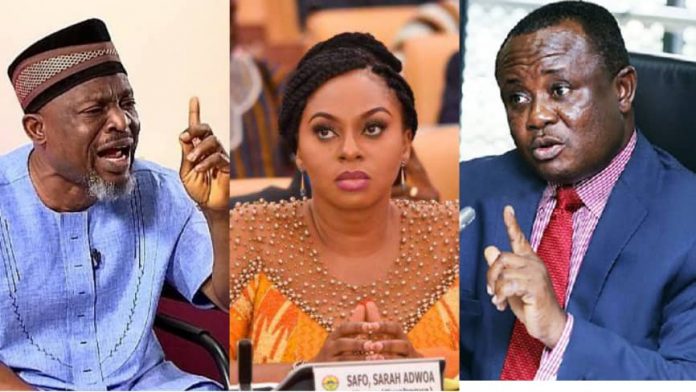 The Minority in Parliament has debunked assertions from the Chairman of the Privileges Committee (PC) and Deputy Speaker, Joe Osei Owusu, that the Dome Kwabenya seat has been declared vacant.

According to the Minority, the Committee has neither drafted a report nor declared Adwoa Safo’s seat vacant for a by-election.

Adwoa Safo is part of three MPs the Speaker of Parliament referred to the Privileges Committee for investigation after their failure to appear in the house for more than 15 sittings.

Mr. Joe Osei Owusu had authorised the Clerk of Parliament to issue a statement to the effect that the position of Adwoa Safo has been declared vacant on the basis of which there should be a by-election and that is a recommendation from the Committee.

But speaking to the media in Parliament today, Thursday July 14, 2022, a member of the Committee, Alhassan Bashir Alhassan Fuseini popularly referred to as A.B.A Fuseini, said any referral coming from the Deputy Speaker is an “absolute pathological lie”.

“Nothing could be farther from the truth. It’s an absolute pathological lie and I want to stand on behalf of the NDC members of the committee and state the facts as they are.

The Sagnarigu lawmaker said making any such would have breached the law of natural justice which requires one to be heard before being acquitted or condemned.

“We’ve met two of the three but there is no report. Let me also say in categorical terms that on the issue of Adwoa Safo the Committee made it clear that we had no opportunity of hearing her even though we have not put that in a report yet and those of you who are legally minded, you don’t acquit or condemn a person without giving the person a hearing. You have not heard in principle of natural justice.

“We want to state on record that the Committee did make some approaches to enable us get to her but even the clerk of the Committee made it abundantly clear that he cannot say for certain that the correspondence that Parliament said we have to give to her has actually reached her.

“So in unequivocal terms, the Committee never and ever at any material moment made any such attribution. So it is important for us to disabuse our minds that any such report exist,” Mr. Fuseini emphasised.

According to the standing orders guiding the committees, the MP said a recommendation needs to be presented to the plenary since committees cannot implement them on their own.

[VIDEO] A.B.A. Fuseini storms Parliament with kenkey and fish to demonstrate how the economy has impacted cost of living