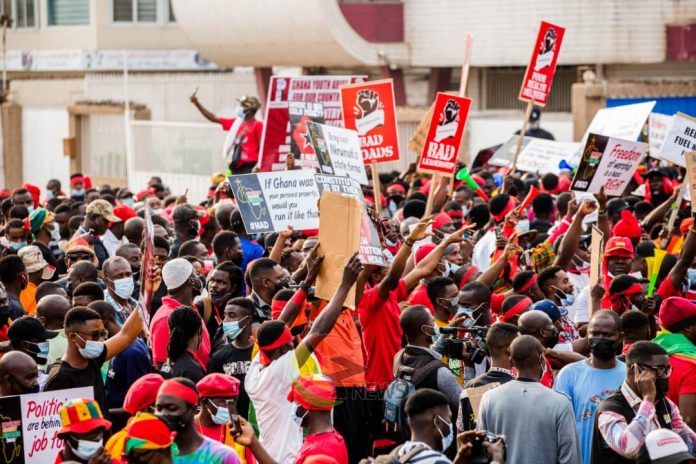 Convener of the #FixingTheCountry Movement Ernest Owusu Bempah has called on the Acting Inspector General of Police (IGP) to immediately arrest the leader of the #FixTheCountry protest for “treasonable” comments made.

Mr Owusu Bempah said the call by Oliver Barker-Vormawor on Wednesday, August 4 for the 1992 Constitution to be overthrown is in flagrant breach of Section 180 of the Criminal and Other Offences Act (Act 29).

“We can’t let these people get off without any consequences to their actions,” the Fixing The Country Convener said in a statement on Friday, August 6.

“The impression of impunity may encourage others to take the same route and it may ultimately lead to violence and the destruction of the fabric of the state.

“We further call on the IGP to as a matter of urgency, show leadership and deal with this matter swiftly and in the strongest possible way.”

Find the full statement below:

Arrest Oliver Barker-Vormawor for Inciting Protesters To Overthrow The Constitution.

Fixing The Country Movement is appalled at the very treasonable statement authored by the leader of the Fix the Country demonstration, Oliver Barker-Vormawor at their August 4, public manifestation.

This according to the Constitution is a treasonable statement.

Fix The Country Movement is of the view that by making that bold declaration, Oliver Barker-Vormawor is imminently imperilling the life of the fourth republican constitution.

While he may have exercised his constitutional right, Oliver Barker-Vormawor’s position as the leader of Public Pressure Group, and the constitutional expectations of law abiding citizens require that he is more circumspect in his public utterances.

The incitement of insurrection against the constitution is not secret but public and known to everyone who cares to know.

Indeed, this is a flagrant breach of the Criminal and Other Offences ACT(Act 29) section 180 which makes the threat of insurrection a treasonable offence.

Again, the Constitutional provision on treason is explicitly clear;

(2) Any activity of a person or group of persons which suppresses or seeks to suppress the lawful political activity of any other person or any class of persons, or persons generally is unlawful.
(3) Any person who –
(a) by himself or in concert with others by any violent or other unlawful means, suspends or overthrows or abrogates this Constitution or any part of it, or attempts to do any such act; or
(b) aids and abets in any manner any person referred to in paragraph (a) of this clause; commits the offence of high treason and shall, upon conviction, be sentenced to suffer death.

In this regard, Fix The Country Movement seizes the opportunity to reiterate the call by many for the Police service and the National Intelligence Bureau(NIB) to as a matter of urgency smoke out this character and his enablers and hold them accountable.

All over the world, throughout history, the treatment against traitors to a nation has always been the same: arrest swiftly, prosecute vigorously, sentence harshly. Every single person who is involved in conniving to have the fourth republican constitution overthrown needs to be treated the exact same way. Every one of them need to be hauled into court and be found guilty of sedition or treason.

We can’t let these people get off without any consequences to their actions.

The impression of impunity may encourage others to take the same route and it may ultimately lead to violence and the destruction of the fabric of the State.

We further call on the IGP to as a matter of urgency, show leadership and deal with this matter swiftly and in the strongest possible way.

The imperatives of human security in democracies cannot be overemphasized and we expect that the Police demonstrate the needed urge to uphold the sense of security in the country.