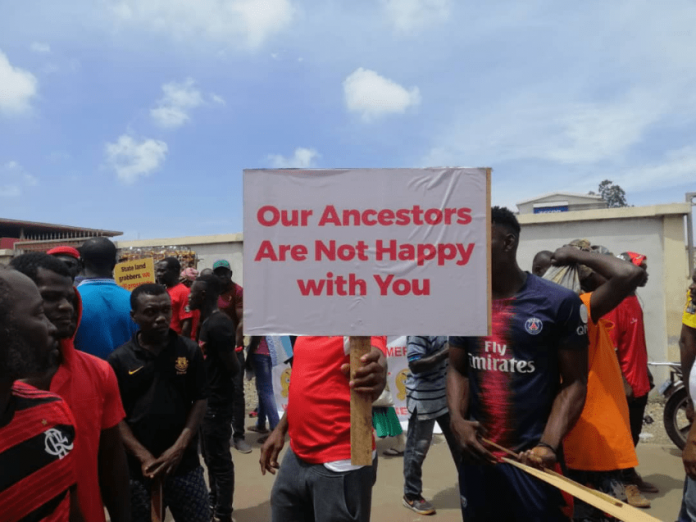 The Police fired shots at some demonstrators after they were pelted with stones during the Arise Ghana pressure group protest in Accra on Tuesday June 28, 2022.

TV3’s Eric Mawuena Ebegta who witnessed the scenes reported that “The Police are still firing as individuals are still throwing stones at the Police.

“They are insisting on using the Ring Road through to the Presidency and the Police are refusing to allow them to do that which has resulted in the firing of tear gas and the use of water canon against the demonstrators. That is the current situation at the Obra spot in Accra.”

In the early hours of the demonstration, Ningo Prampram lawmaker, Samuel Nartey George said that members of the pressure group will continue to put pressure on the government to do the right things.

He called on the President to stop renting jets for his trips outside the country and resort to the Presidential jet which was used by his predecessor Former President John Dramani Mahama.

Addressing members of the pressure group during their demonstration in Accra on Tuesday June 28, he said “The President should stop flying in rented and luxurious jets and use the presidential jet that President Mahama used.

“One day, we assure all and like the Bible says, weeping may endure for a while but joy comes in the morning. Our joy will come on the 7th of January 2024/ But between now and December 7 2024.”

The purpose of the demonstration, according to them, is to protest against persistent and astronomical hikes in fuel prices by the Akufo-Addo/Bawumia government that has imposed excruciating economic hardships on Ghanaians.

It is also to protest against the imposition of “the obnoxious E-Levy on the already-burdened Ghanaian people by the insensitive Akufo-Addo/Bawumia government.

“Demand a full scale and bi-partisan parliamentary probe into COVID-19 expenditures; Protest against the grabbing of State lands by officials of the Akufo-Addo/Bawumia government, particularly the de-classification of huge portions of the Achimota Forest reserve.

“Protest against the increased rate of police brutalities and state-sponsored killing of innocent Ghanaians, as well as the growing culture of human rights abuses under the watch of President Akufo-Addo and Alhaji Bawumia.”