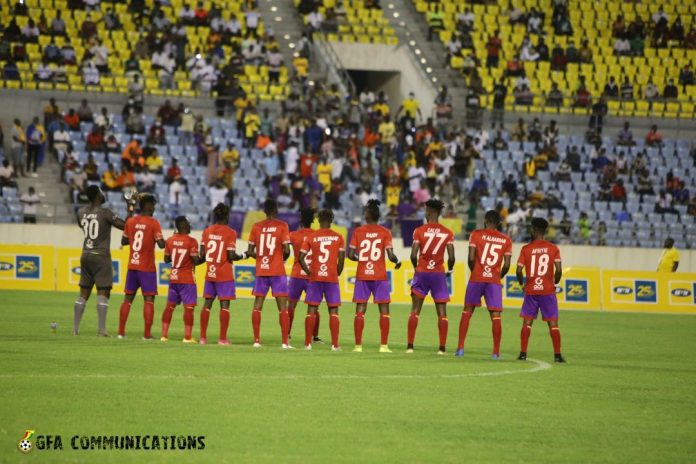 Hearts of Oak remained on course for a domestic double after beating Medeama on Sunday night to reach the MTN FA Cup final for the first time since 2017.

Having secured the Ghana Premier League title and chasing an 11th FA Cup crown, the Phobians produced a fantastic performance to blow away Medeama 3-0 at the Cape Coast Stadium.

They will now play AshantiGold, who cruised past ten-man Berekum Chelsea 4-1, in the final on 8 August.

The Mauves and Yellows were seeking to destroy the double aspiration of their former boss Samuel Boadu, but the highly-rated coach came out tops again.

When they met in June in the league, Boadu’s side won 2-0 with goals from Benjamin Afutu and Ibrahim Salfiu.

On Sunday, however, Salifu did not make the starting eleven. Afutu got the nod and it was his goal that set Hearts on their way to victory.

The midfielder, unmarked in the box, planted a vintage header into the back of the net to give Hearts the lead after just 12 minutes.

Boateng then brought down Daniel Barnieh in the box. The striker stepped up to take the penalty and tucked the ball home.

Eric Kwakwa and Ahmed Toure were both guilty of missing decent chances for Medeama before the end of the match.